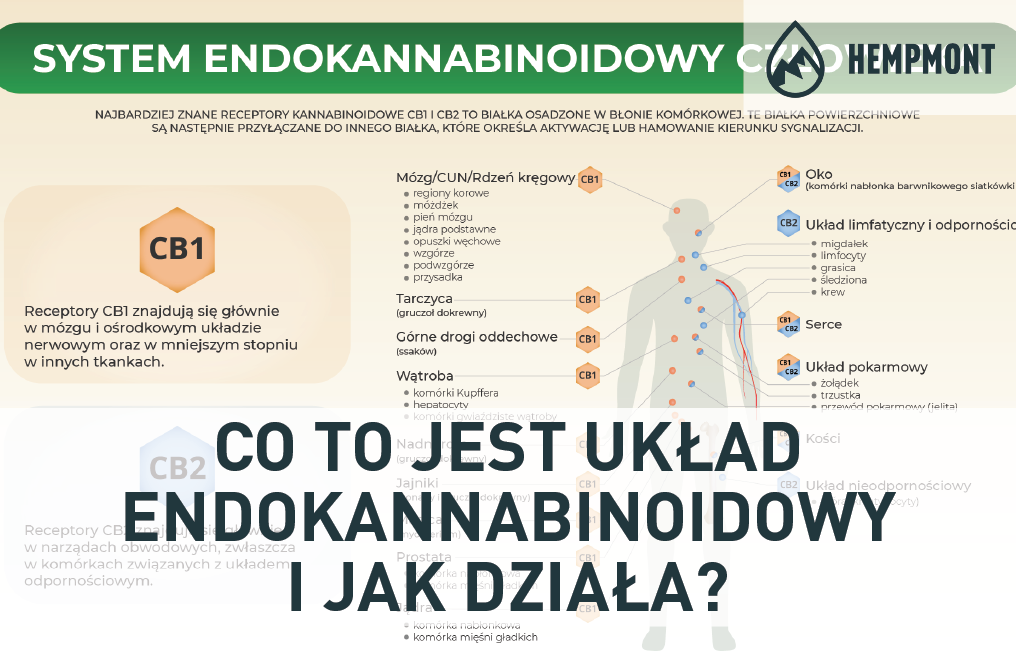 The endocannabinoid system (English. Endocannabinoid system - ESC) is the most recently discovered system in the human body. Everyone knows about the nervous or respiratory system, but who has heard of the cannabinoid system? Probably still very few, but this knowledge will probably become common knowledge soon. The ESC is made up of a multitude of receptors, which can be found basically throughout the body. If it is functioning properly, the body is in a state of equilibrium, or homeostasis. As the ESC system is a relatively recent discovery, research is still ongoing into how it works and what functions it performs in the body.

What is the enocannabinoid system?

The endocannabinoid system is like a network of receptors scattered throughout the body, which take an active part in many physiological processes taking place in the human body. They therefore influence, for example, the body's energy balance, motor activity, mood, motivation, energy use, feelings of hunger and satiety and many other functions. All thanks to the fact that its receptors are found in the brain, bones, lungs, nervous and reproductive systems, fat tissue, muscles, etc.

The composition of the endocannabinoid system includes:

Functions of the cannabinoid system

The cannabinoid system, although the latest discovered and least understood, is one of the key physiological systems of every mammal, including humans. It was first discovered and described by Professor Raphael Mechoulam, who, together with his colleagues, isolated cannabinoids from hashish in 1964. Research on ESCs is still being carried out on a large scale around the world today, but many of us only heard about the cannabinoid system during the fight to allow the use of medical marijuana, which incidentally became legal in Poland (under many conditions).

We learned about the many functions the ESC performs in the body, such as regulating and controlling:

In a nutshell, it is a system that is the regulator of the human organism, a guardian, one might say, of the correct functioning of a whole host of processes that take place continuously in our body.

Cannabinoids are a group of organic chemical compounds that interact with cannabinoid receptors. Before it was discovered that the human body contains a cannabinoid system with its endocannabinoids, it was thought that these substances were only found in cannabis. New discoveries have given rise to the division of this group of compounds into:

Plant cannabinoids are not soluble in water, but only in fats, alcohols and other non-polar organic solvents.

How CBD oil works on the cannabinoid system

The effect of cannabidiol (CBD) on the endocannabinoid system is an extremely complex, non-obvious issue that is still being studied by many scientists around the world. Interestingly, CBD has little direct effect on CB1 and CB2 receptors, resulting in weak binding of the receptors to cannabinoid molecules. The receptors bind much more readily to THC (if CBD and THC are given simultaneously). Scientific studies have shown that CBD is a potent negative allosteric modulator for the CB1 receptor. Its effect is strongest in the presence of THC. Studies have unequivocally shown that CBD has a mitigating effect on the psychotic effects of THC. As for CB2, these receptors are involved in inflammation. CBD (unlike THC, which stimulates these receptors) has the power to attenuate this receptor response. This is why one of the properties CBD oil is the anti-inflammatory effect.

However, the effects of cannabidiol (CBD) on the cannabinoid system are only a fraction of the positive effects of CBD oil on the body. The spectrum of hemp's beneficial effects on the human body is much broader, and many aspects of it are still unexplored.