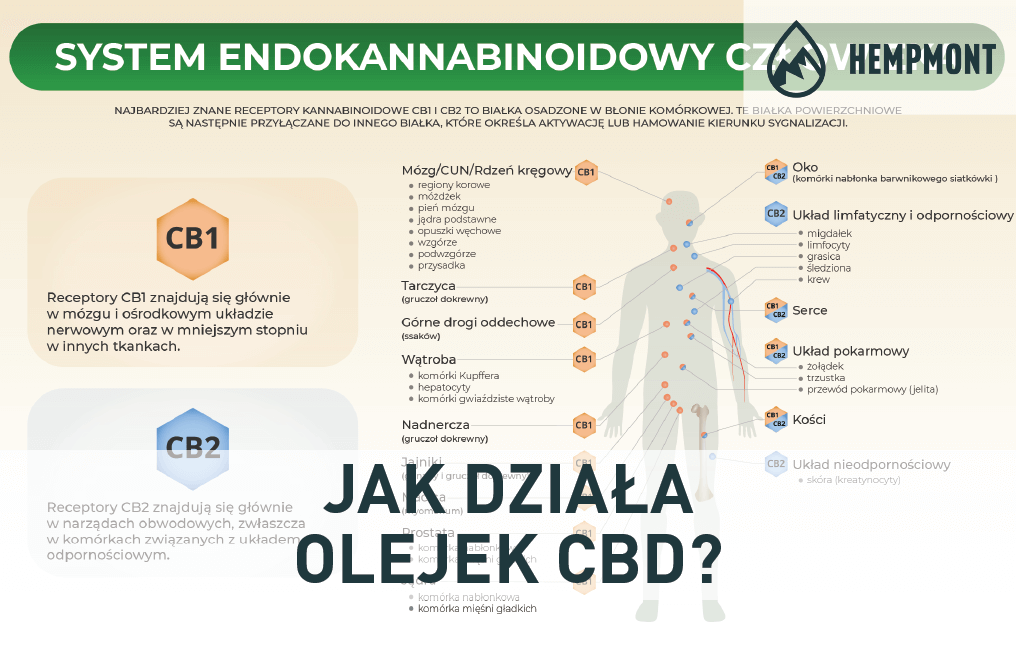 CBD is a cannabinoid that is extracted from hemp seed (Cannabis sativa L. of the family Cannabaceae). This species of hemp has been cultivated for many centuries for its fibre and oil. It is a dioecious plant, where both female and male individuals have the ability to produce an oily substance containing cannabinoids. Due to their plant origin, they are called Phytocannabinoids. More than 100 are known, the most popular being: THC (tetrahydrocannabinol), an organic chemical compound and the main psychoactive substance in cannabis, which is banned in Poland, and CBD - cannabidiol, an organic chemical compound that does not erase psychoactive effects, but is legal in Poland.

Among the plethora of cannabinoids, CBD is one of the most interesting. Primarily because, although they have been studied a little initially, CBD is one of the few active cannabinoids that does not have a psychotic effect, while having quite a strong positive effect on the human body. How it works CBD oil? Why is it so effective? We will try to explain everything in simple terms.

Once scientists had discovered the cannabinoids in cannabis, it was time to find answers to the questions of what it is about them that makes them have such a big impact on the human body. THC and CBD in particular. Eventually, they discovered. It has emerged that there is a vast network of cell receptors in the human body, the 'human cannabidiol' receptors, which have been named the endocannabinoid system (ECS).

A truly revolutionary discovery, which made it possible to define to some extent the mode of action of cannabinoids and also to learn about the structure of the endocannabinoid system (ECS) and to separate its three components:

Endocannabinoids (from the Greek endo - within and the Latin name for hemp - Cannabis sativa) are derivatives of arachidonic acid and are small molecules that act as signalling molecules (neurotransmitters). They are responsible for the activation of cannabinoid receptors. The body produces, among other things. anandamide (so-called AEA) and 2-Arachidonylglycerol (2-AG). They mimic the effects of natural cannabinoids.

Cannabinoid receptors - There are two main types of receptor: CB1 and CB2 and are found in many cell types throughout the body. Cannabinoids bind to these receptors and either regulate or activate them.

Enzymes are proteins that catalyse chemical reactions when they act. They are associated with the biosynthesis and degradation of endocannabinoids (that is, they both build and break them down). Thus, one of the more important enzymes in this system (fatty acid amide hydrolase), when acting, degrades anandamide. 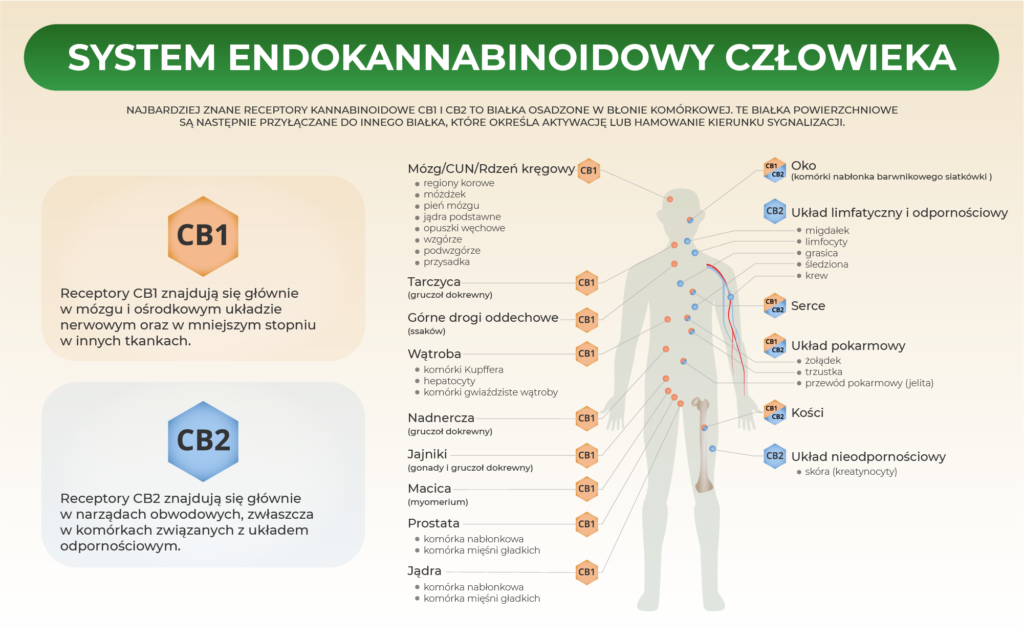 Receptors and enzymes of the cannabinoid system (ECS)

Research is still ongoing and we probably won't fully understand how they work any time soon CBD oils and how the cannabinoid system (ECS) works, but receptors and enzymes may be where new drugs begin their action to relieve pain, treat peripheral vascular disease, cause an increase or decrease appetite. The revelation that endocannabinoids are actively involved in the communication system between neurons opened the way for scientists to further research and new developments for the effective treatment of pain, anxiety, obesity, nausea and many other diseases and conditions.

Function of the endocannabinoid system (ECS)

As is already known, cannabinoid receptors can be found throughout the human body, in the membrane of a great many cell types. They are therefore located between the inside of cells and the intercellular space. The membrane is a kind of protective barrier whose receptors receive and respond to information coming from inside the cell. Receptors thus act as intermediaries in the transmission of various information between the extracellular space and the interior of the cell. And depending on where a receptor is located, it influences different processes. It receives a signal and triggers the cell's activity towards a state of equilibrium. This is the same principle on which fever works in humans. For example, inflammation occurs, in response to which the body temperature rises to fight for a state of equilibrium, which is the proverbial 36 and 6.

The findings of research on the endocannabinoid system (ECS) were described in detail in 1964 by Professor Raphael Mechoulam, a scientist from Israel who, together with his colleagues, isolated cannabinoids (THC) from hashish. In doing so, he initiated research into this remarkable regulatory system of the human body, which continues to this day. If it were not for the professor, we might still not be aware of the existence of the endocannabinoid system (ECS) and what it is for the human body. This discovery led to the start of a collaboration a William Devane, another scientist and the fruit of their joint research was the discovery of the endocannabinoid, anandamide, in 1992.

Further research has confirmed that the primary functions of the endocannabinoid system (ECS) include regulation and control:

How CBD oil works - or the ECS response to CBD

If one were to look at hemp and man from the perspective of biochemistry, this plant, among other plants, is the closest to man. The reason? The human body produces endocannabinoids and cannabis contains phytocannabinoids (phyto - refers to their origin - from flowers). Research has shown that phytocannabinoids, due to their chemical structure, have the power to support the endocannabinoid system. This is because the substances contained in cannabis have the ability to bind to receptors, not to mention the ability to remain in the body longer and reach a much higher concentration.

Scientists confirm the existence of more than 100 cannabinoids as of today, but well studied are....two. Yes, just two. The first is THC (the psychoactive delta-9-tetrahydrocannabinol) and CBD (cannabidiol). Scientists really have a lot to discover.

CBD, or cannabidiol, which, unlike THC, is not a cannabinoid receptor agonist (it does not bind to them), but instead acts as a modulator of the endocannabinoid system (ECS). It also has no intoxicating properties.

How does CBD oil work? In a nutshell, it can be said that CBD oil stimulates the ESC (endocannabinoid system) to produce more cannabinoids, enhancing the health-promoting properties of the other hemp constituents. Scientists furthermore believe that CBD oil supports the human immune system, as it stimulates the CB2 receptors contained in it.

Another function that the CDB performs is being a natural blocker of the FAAH enzyme, which is responsible for the breakdown of anandamide. This has the effect that this endocannabinoid can not only survive much longer in the body, but its natural levels are even increased.

One more property of CBD is its ability to affect THC, by reducing the activity of CB1 receptors in brain cells affected by THC, thereby reducing the psychotic effects that THC induces.

Products of the fibre variety of cannabis are completely legal in Poland, giving you the opportunity to test the medicinal properties of cannabidiol on yourself, without psychoactive effects.