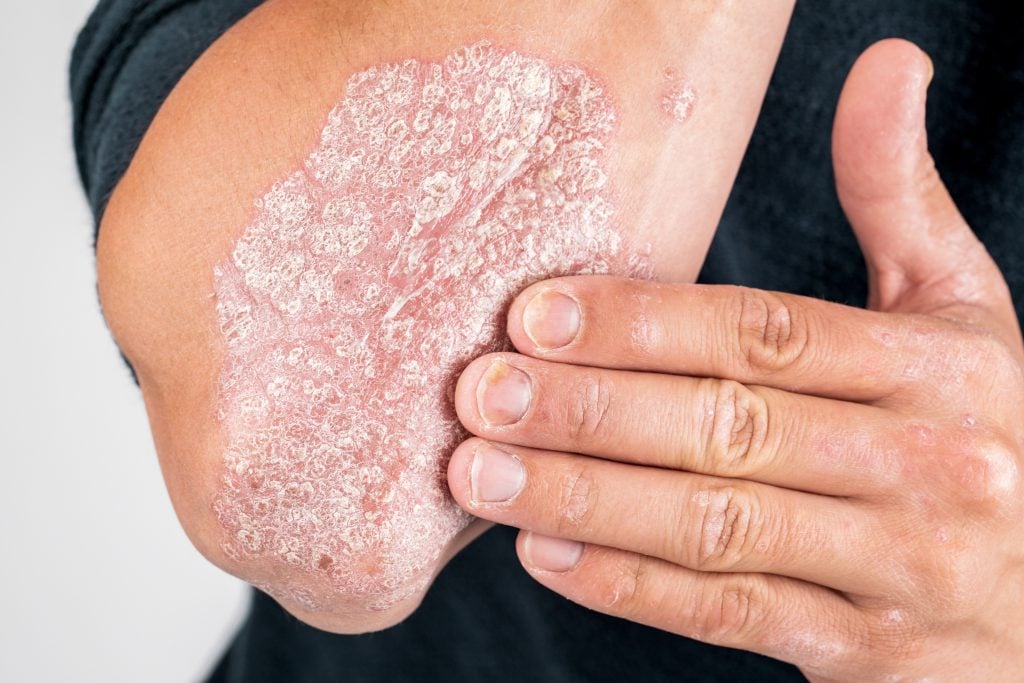 Due to the significant change in lifestyle and the increasing awareness of both patients and doctors compared to the last century, many new diseases have seen the light of dayand the elderly have finally started to be diagnosed correctly, which is undoubtedly encouraging. However, it follows that more and more people are suffering from a number of chronic diseases caused by constant inflammation present in the body, such as psoriasis or AD, or even the ever-popular allergy. As an alternative to drugs or steroid ointments, patients also want to try other treatments, especially natural ones, because they have the highest hopes for them, for example due to their lack of side effects. This is certainly why, with the growing popularity of CBD use, many people want to test its effects on their ailments, if only to alleviate the symptoms of psoriasis. CBD is believed to have anti-inflammatory and antimicrobial properties that can help with typical psoriasis complaints- reducing redness or itching. In this article, we will discuss the potential benefits of using CBD to treat psoriasis and how to use CBD oils for psoriasis.

What is psoriasis and what are its symptoms?

Psoriasis is a chronic skin disease of an incompletely understood aetiology, referred to as permanent inflammation, which is characterised by desquamation, as well as the appearance of red, often widespread patches on the skin, and sometimes silver-coloured scales at a later stage. These spots are usually distributed around the joints, including on the elbows and knees, as well as on the scalp and trunk. Unfortunately, this is the result of an impaired epidermal renewal process and may have a genetic and/or environmental basis. Psoriatic lesions often cause unbearable itching, which can lead to skin irritation and even subsequent superinfection. Fortunately, contrary to popular belief, it is a completely non-communicable but unfortunately recurrent condition. And this is one of the most bothersome symptoms of psoriasis, and therefore characteristic of chronic inflammatory diseases. There are several types of psoriasis:

All these types of psoriasis can be treated in a similar way - with glucocorticosteroids, which are often prescribed to alleviate the symptoms of the condition and unfortunately have a number of side effects, which is why not everyone is willing or able to use them, often followed by an exacerbation of the already existing skin inflammation. Patients also notice only a temporary improvement in their skin condition with such therapy, and when the therapy ends, the symptoms return, often amplified. This is why so many sufferers seek alternative forms of treatment without side-effects that not only act superficially, but mainly on the cause of the disease.

How do CBD oils work for psoriasis?

Research conclusively demonstrates that skin biology is controlled by the human ECS endocannabinoid system. What is the endocannabinoid system? It is a recently discovered, one of the systems in the human body that, being in a state of balance, ensures the optimal functioning of the body. It directly interacts with and influences other systems through its receptors and enzyme production in the human body, including the nervous or immune system. It is the central nervous and immune systems' correlation with CBD that has been most extensively studied, but the most recent reports speak of the effect of this cannabinoid on skin function. Malfunctioning of the endocannabinoid system affects skin diseases such as eczema, acne, atopic dermatitis or just psoriasis, among others.

The CB1 cannabinoid receptors with which CBD interacts are mainly distributed in large quantities in the brain and spinal cord, and CB2 in the limbic nerves, immune and digestive systems. Furthermore, studies have shown that  CB1 as well as CB2 receptors are present in epidermal keratinocytes, dermal nerve fibres, dermis cells, melanocytes, eccrine sweat glands and hair follicles. They also take part in the formation and maintenance of the skin barrier, cell growth and differentiation. This is why it is so important to maintain the balance of this system if we want to keep our skin looking good.

When it comes to the use of CBD for psoriasis, to achieve the best results, it is then advisable to act bi-directionally from the outside as well as from the inside. Research results show that the application of CBD to the skin produces very good resulalts when it is administered in a mixture with a carrier such as shea butter, often used in hemp ointments or in gel form. Such a form was used in rat studies to reduce inflammation and was found to be well absorbed, as plasma concentrations showed a linear relationship to the dose used. In vitro diffusion studies showed a high permeation potential of CBD.

In another study, this time on mice after topical application of CBD, increased levels of HMOX1 and the expression of keratins and wound repair capacity were observed in their epidermis.  And using human keratinocytes, researchers have shown that CBD is able to penetrate cells and offset the oxidative stress response resulting from UVB radiation and hydrogen peroxide. Studies have shown that CBD has a protective effect against peroxide-induced reduction of polyunsaturated fatty acids in the cell membrane, helping to protect membrane integrity. Therefore, the anti-inflammatory and antioxidant effects calm and reduce inflammation associated with psoriasis symptoms, and the addition of a moisturiser such as shea butter will calm and hydrate lesion-irritated skin.  What distinguishes the use of CBD from other treatments for this disease is that, in combination with or as an ointment, for example, it helps to heal existing wounds and counteracts the formation of new ones.

As previously mentioned, CBD is renowned for its extremely valuable antioxidant, anti-inflammatory and analgesic properties, so when used internally in the treatment of psoriasis it can have surprisingly good effects due to its cooperation with the human endocannabinoid system. Pro-inflammatory cytokines, which are produced during the inflammatory process in psoriasis, can be counteracted with CBD and thus calm and help negate the body's inflammation. The analgesic properties of this cannabinoid, which are confirmed by numerous studies, will make it possible to obtain relief from the pain caused by the wounds created by the disease process.

Which CBD oils for psoriasis?

When choosing a CBD oil for allergies, it is wisest to start with a concentration of 10% if one has no previous experience of using CBD. You can start using it 3 times a day, a few drops at a time, while remembering to choose a proven oil with the full spectrum of cannabinoids, with a composition confirmed by research, so that you benefit from the beneficial effects of all substances, not just CBD. It is also worth trying a two-pronged approach, using the oil internally and externally. You can then use an ointment with CBD or enrich your own with CBD oil. For the sake of your own health, use a certified oil that is free of contaminants such as fungi, moulds or heavy metals. This is extremely important if you want to achieve the desired result. Therefore, it is also a good idea to use our dosage calculator to determine the optimal dose.

Despite being one of the most common skin conditions, there is still little awareness of psoriasis in the general public. It is highly likely that the coming years will bring new reports on the topic of CBD oil for psoriasis, as interest in the therapeutic properties of CBD is currently very high and also many studies are already in the pre-clinical phase.