CBD oils and their therapeutic properties

CBD oil, or cannabidiol oil is produced from hemp seed (Cannabis sativa L). It is extracted using solvent extraction of hemp flowers, as they are the richest source of cannabidiol. The resulting extract is then dissolved in oil. The result is CBD oil, which is a highly versatile medicinal product. At the same time, it has no psychoactive effects and is not addictive. Scientific studies confirm its anti-anxiety, sedative, sleep-promoting and neuroprotective properties. Neither does it CBD oil nor products containing it have narcotic properties, so it is easy and legal to buy the product. What is CBD oil? What medicinal properties does it have? Who should take it?

Cannabinoids are natural chemical compounds that are found in a variety of plants, but their highest concentration is in cannabis varieties and cannabis.

Cannabinoids are a family of about 80 chemical compounds, which include: 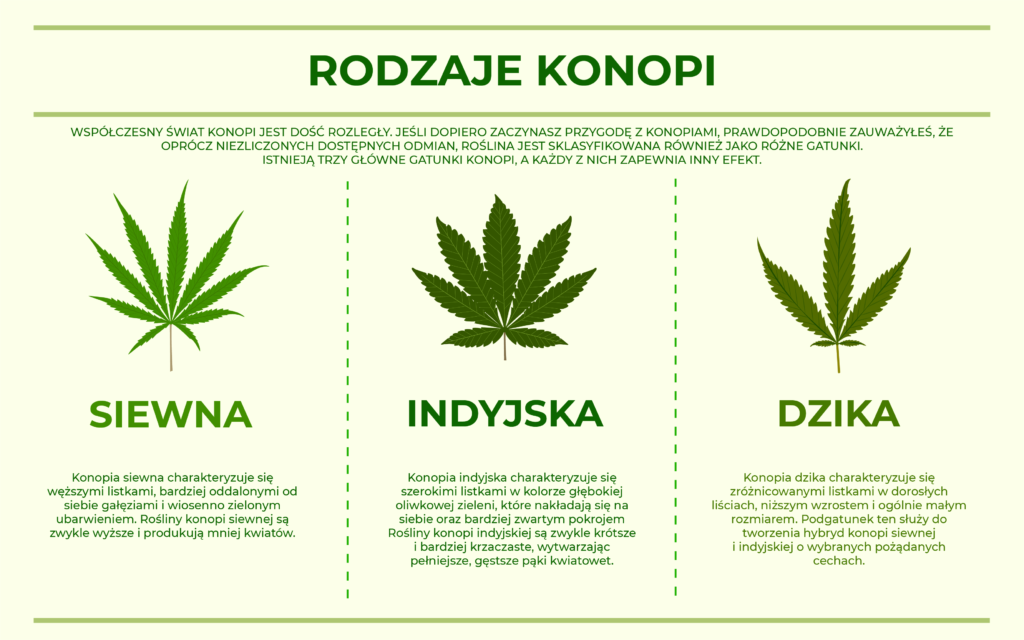 CBD is one of those most interesting cannabinoids, and research into its medicinal and therapeutic potential is being conducted worldwide on a large scale, in the context of a great many diseases and ailments.

Its uniqueness lies in the fact that it is one of the few cannabinoids studied that does not cause any neurobehavioural changes, i.e. no psychotic effects. This is why it is used as a therapeutic agent without fear of addiction or side effects. For this, the spectrum of positive effects of CBD oil on the body is truly impressive.

CBD supports the immune, nervous and metabolic systemswhich translates into an increase in the immune system, stimulation of the nervous system and cell regeneration. It also exhibits antiemetic and nausea-inhibiting effects, and this assists patients after chemotherapy. CBD oil also stimulates appetite. Studies have also confirmed that CBD oil has a positive effect on the skin, making it accelerates wound healing and epidermal regeneration.

Both scientific research, which is ongoing, and patients themselves confirm that CBD oil significantly improves quality of life, relieving pain. Even chronic and persistent pain. It therefore brings relief to those suffering from, for example migraines.

Suffering from rheumatic pains also report a significant improvement in their wellbeing, feeling immensely relieved. Using CBD oil makes it easier for them to function on a daily basis. But CBD is also great applied ad hoc, for headaches or toothaches.

The effects of allergies are further ailments that CBD oil significantly alleviates, thus significantly improving the quality of life for allergy sufferers. And it does not matter whether it is a seasonal allergy, a chronic allergy or a food intolerance.

CBD oil shows effects antianxiety and antipsychoticwhich predestines it for use in psychiatry. There are already preliminary results of studies stating its usefulness in the treatment of e.g. schizophreniawhich makes it a safe alternative to the pharmacological agents used.

Experts say that CBD oil, thanks to its action on serotonin receptors in the brain, while also showing a calming effect, should be used by people struggling with anxiety, mood disorders and even depression. Thanks to its anti-stress effect, it also supports the treatment of patients suffering from a type of depression resulting precisely from long-term stress.

Research into the effects of CBD on depressed patients is particularly intensive and is being carried out in many research centres around the world. This is because the observation of patients using the oil confirms the very positive effects of cannabidiol on their bodies.

Other properties of CBD oil

Studies have shown that cannabiodiol has neuroprotective properties (which protect brain cells, i.e. neurons), antiepileptic and mitigating the effects of epilepsy attacks and alleviating dystonia (involuntary movements that cause twisting and bending of various parts of the body).

CBD oil also has anticoagulant properties. This substance also reduces intraocular pressure. Cannabidiol is polyphenolic in nature, which also makes it a a powerful antioxidant.

In addition, studies of biochemical and pharmacological effects suggest that CBD oil should also be used supportively in the treatment of nicotine and alcohol addiction.

How to apply CBD oil effectively

In order for the CBD oil to be quickly and maximally absorbed into the body, and thus to achieve the desired therapeutic effects, it should be applied sublingually. Because the oil is naturally hydrophobic (repels water), the body has difficulty absorbing the ingested substance. If, on the other hand, the drops are placed under the tongue, the cannabidiol is immediately absorbed through the mucous membrane and begins to act quickly and effectively.